These merciless female warriors, armed with rifles, are rightly feared by men for their aggression in battle.

Originally formed as a band of elephant hunters, they were developed into a royal bodyguard recruited from among the King’s wives, a group of women that sometimes numbered in the hundreds. Willing volunteers expand this force, while other recruits are put forward by disgruntled husbands and fathers who visit the King with tales of spousal misbehaviour! The Amazons are denied the right to marriage once in the regiment, and religion is used to give them a sense of being sacred.

They are extremely well trained, and inculcated with a very aggressive attitude. They are ferocious fighters with a reputation for decapitating those who are unfortunate to become their captives. Woe betide the foe that underestimates them!

Unit is available when holding a region in Northwest Africa. 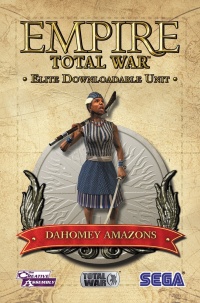 This unit is part of the Special Forces Units & Bonus Content DLC. It was originally a pre-order incentive for Amazon.co.uk.