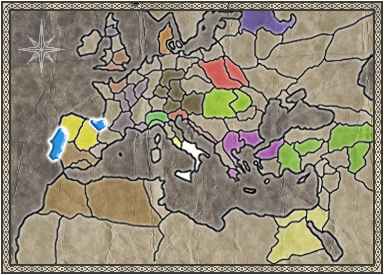 Of all of the European royal courts, Portugal is the youngest, having only just recently come of age, growing from county to Kingdom. As is typical at this stage of life, there have been more than a few growing pains for Portugal, and its inaugural King, Afonso Henrique. As if being recognised as the sovereign of a land were not hard enough at the best of times, Afonso's own mother attempted to seize power for herself before he was forced to defeat and then exile her!

As grim as Portugal's first years have been, there is no doubting that these shameful acts of betrayal within his own family have ensured that Afonso is a true survivor - and only a man that has endured through such troubles is likely to turn his fledgling Kingdom into a western power. Portugal's greatest threat does not lie within however...

Despite some of the Kings and Emirs of the Iberian Peninsula supporting religious tolerance, the Christian and Islamic faiths do not appear to be able to share these lands peacefully. The ongoing Reconquista seems almost certain to ensure that the Moors will be an enemy of Portugal, at least until they are driven back across the straits of Gibraltar. That said, even then they will still be an immediate threat.

The other obvious threat is that of Alfonso el Valiente. No matter how noble he may be, any man who would declare himself Emperor of Spain essentially declares himself the rightful ruler of all of Iberia. It is entirely possible that he will seek to once again make Portugal a mere county to offer in his political barter.

Some of the Portuguese believe that the best tyranny to face is that of distance. Poised on the edge of the civilised world, perhaps Portugal's fortunes lie across the seas and oceans, rather than across her immediate borders. 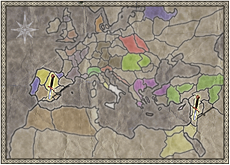 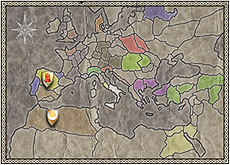