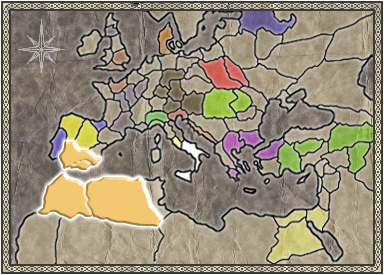 The Moors were originally a nomadic people, the original inhabitants of Mauretania on the north coast of Africa. They rose from obscurity in the 8th century when they converted to Islam, and proceeded to spread rapidly in several directions - including north-west into the Iberian peninsula. They soon had almost total dominion over all of Iberia with the exception of the lands to the north where some resilient Christians held fast, but Islamic Spain was a collection of cities more than a true caliphate - until now.

The Almoravid Berbers have risen from their homelands near the west coast of Africa to establish their capital in Marrakesh, and assume control of the Moorish empire. Their dominance over this corner of Africa is absolute, and the sense of unity they have brought to the Moorish empire has once again restored order in southern Iberia. This move for stable Islamic rule is however also the cause of the greatest threat to the Moors... Christian unity.

Once weak, uncultured and disorganised, the kingdoms of Leon and Castile are now unified in their challenge against Islamic rule of the peninsula, and look set to actually launch a genuine offensive to revive their Reconquista. Their heroes such as El Cid are extremely admirable adversaries, as men who are driven with what they believe to be a noble purpose always are.

Perhaps the best course of action for the Moors is to play the rulers of Portugal and Castile against one another. So long as they are united in a religious crusade against Islam they are the Moors' greatest threat. Of course, the greed of Christian leaders is something that can be counted upon, and siding with one of these two powers could be possible even if it is undesirable. It is an option they must keep in mind, for expanding too far eastward towards Arabia involves taking on other followers of Islam such as the Egyptians... something most unlikely to be the will of Allah.

Can field a good mix of light cavalry and infantry, and effective spears. 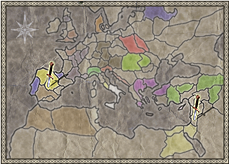 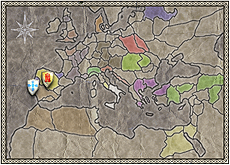