Hannibal at the Gates Campaign Pack 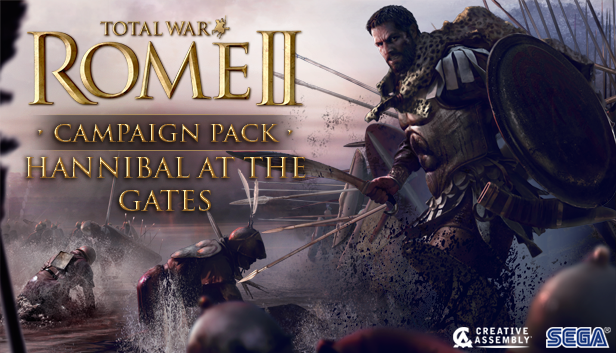 Hannibal at the Gates - What is it?

Dropping you into the Western Mediterranean at the outbreak of the 2nd Punic War, Hannibal at the Gates features a new campaign map focused on the period that brought the ancient-world superpowers of Rome and Carthage to all-out war.

One of the most famous in history, the conflict demonstrated the tactical genius of great rival generals Scipio and Hannibal. Can you recreate their remarkable strategies, or can you do better? How will you change history?

You enter the war as Carthage or Rome, command the noble Hellenic city-state of Syracuse, or, for the first time in ROME II, play an Iberian faction as the Arevaci or the Lusitani.

A more detailed representation of the western Mediterranean than the ROME II map, with players able to expand across 19 provinces dotted with resources and settlements.

The major powers of the time, Rome and Carthage, begin at loggerheads but with a number of key regions and client states under their control. Syracuse, the Arevaci and the Lusitani all start with a single region, offering a significantly different and more formidable challenge than playing as one of the two great empires.

Rome and Carthage both feature new civil tech-tree branches focused on diplomacy. Both sides begin with multiple allies and client states, and can undermine their opponents’ support by diplomatic means. 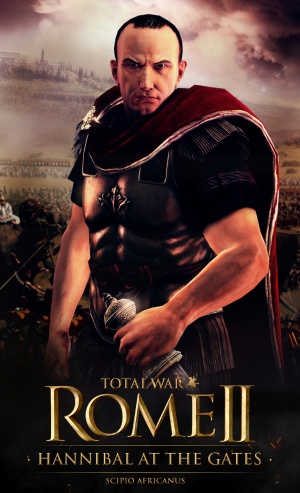 Born into the Scipio branch of Rome’s powerful Cornelia family in 236 BC, Scipio would come to be known by many names: Scipio Africanus, Scipio the Elder, Scipio The Great – but it would take a long war and many battles before he distinguished himself as the great hero of the Roman Republic.

Entering military service at a young age, he witnessed slaughter aplenty as Hannibal rampaged through Italy. Surviving the comprehensive Roman defeats at Ticinus, Trebia and Cannae, he learned much about Carthaginian tactics, often fighting alongside his father.

However, when his father and uncle fell in battle against Hannibal’s brother Hasdrubal in 211 BC, everything changed. Scipio approached the Senate and stridently offered to lead an army into Iberia. Impressed by the young Scipio’s determination and noble bearing, they approved. In a surprise assault, Scipio captured Nova Carthago, and afterward conducted himself and his men with such humanitarian candour that he won many local supporters. Scipio had achieved the foothold he needed to ultimately conquer Iberia.

At just 31 and with Iberia under his belt, Scipio was elected Consul and awarded the Sicilian garrison. This was something of a veiled insult from certain jealous, powerful senators, as a posting to Sicily was generally seen as a punishment. There, he found many veterans of prior Roman defeats at the hands of Carthage, and through his inspiring presence and force of will, mustered a compact but highly-motivated force, poised to strike into Africa and the Carthaginian homelands. Conservative elements of the Senate – perhaps fearful of Carthaginian reprisal – refused Scipio any military support, however. If he and his men crossed into Africa, they would do so with the Senate’s permission, but they would do so alone.

Landing near Utica, Scipio’s army naturally drew the attention of Carthage, by this time allied with Numidian forces under Massinissa. Scipio achieved a stunning ambush against a more balanced force, slaughtering an estimated 40,000 Carthaginian and Numidian troops. The tide was turning heavily in Rome’s favour, and Carthage knew it. Hannibal, languishing in stalemate after his Italian campaign ground to a halt, was recalled to Africa, and the stage was set for a showdown between two of history’s greatest generals.

The Battle of Zama saw Hannibal take a sledgehammer approach. His plan was simple: a massive frontal charge with war elephants would punch holes into the Roman lines, which the Carthaginian infantry would then exploit. However, Scipio’s counter was artful; the elephants encountered many traps, javelinmen, and trumpeters, who sowed fear and confusion among them, and his infantry carried out an elaborate manoeuvre, side-stepping the remaining elephants so they passed through channels in their ranks. Then, Scipio’s superior cavalry successfully countered Hannibal’s, and the field was clear for a straight-up clash of infantry. The fighting was long, fierce and bloody, and was only decided when the returning Roman cavalry re-entered the fray and smashed into the Carthaginian rear.

Scipio returned to Rome a hero, where he earned the name Africanus. In Rome’s most desperate hour, he had risen to conquer Iberia and challenge the might of Carthage. And in spite of great odds, and a lack of support or even belief from Rome, he conquered Hannibal himself. From the moment he commanded his first army, Scipio had not lost a single battle.

Hamilcar Barca, Hannibal’s father and a leader of Carthage, was a veteran of the first Punic war. He had seen his nation defeated at the hands of Rome, and his intent was to restore glory to Carthage, first by conquering Iberia. Livy records that when the young Hannibal begged his father to accompany him, Hamilcar agreed, but made his son swear that as long as he lived, he would never be a friend to Rome. After his father drowned in battle and his brother was later assassinated, command of the Carthaginian army fell to Hannibal.

He proved himself a decisive leader and a brilliant tactician, winning victory after victory in Iberia. Rome, fearing what was beginning to look like an ominous resurgence in Carthaginian power, formed an alliance with the city of Saguntum on Iberia’s eastern coast. This was the excuse Hannibal needed to reopen hostilities with Rome. In 218 BC, he gathered 40,000 infantry and 12,000 mounted troops and began the long slog east to Rome. 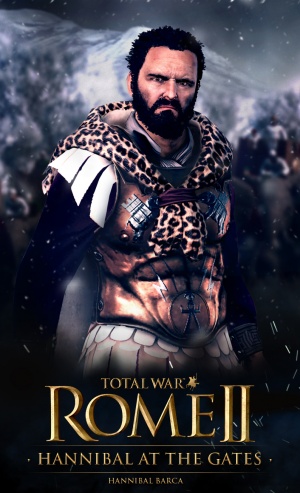 Crossing the Pyrenees, he began to lose troops to attrition. By the time he reached the Rhone, he was down to 38,000 men and 8,000 mounted troops, including 37 elephants. After the gruelling final hurdle of the Alps, Polybius records that Hannibal’s army was reduced to 20,000 troops and 4,000 mounted. His men finally descended into the Po Valley in the north of Italy, where he bolstered his forces with those of the native Gauls. Hannibal had made it, and the element of surprise was with him. The Second Punic War had begun.

Scipio Africanus’ father led a hastily-assembled Roman force against Hannibal at Ticinus, in which he was severely injured; only the prompt bravery of his son, who rode onto the field to rescue him, saved his life. Little did Hannibal know, this young Scipio would later become his nemesis.

Hannibal piled victory upon victory as he forged his way south through Italy. Trebia, Trasimene, Cannae; these battles would live on in infamy for Rome. But while he defeated the Romans at every turn, he found himself unable to impose a lasting change in Italy and the momentum of his campaign slowed. Awaiting his brother to join him for a combined attack on Rome, he learned of Hasdrubal’s defeat and death at the hands of Gaius Claudius Nero and Marcus Livius at the battle of Metaurus. His war in Italy had entered a state of stalemate; Hannibal could make no further inroads, and Rome didn’t quite have the muscle to evict him. He retreated his forces to the south of Italy, and occupied Bruttium for four years.

In 203 BC, Hannibal was recalled to Carthage. Scipio, flush with his successes in Iberia, had landed his Sicilian army at Utica. Hannibal marshalled Carthage’s forces, and the two armies massed at Zama. Hannibal and Scipio met on the plains to negotiate peace between Rome and Carthage, but no consensus could be met over terms. The generals parted with an air of great mutual admiration, and the decisive battle of the Second Punic War began in earnest.

Hannibal took a blunt approach. He flung all 80 of his elephants at the Roman front lines, but Scipio was ready for such a gambit. He laid traps. His javelinmen skirmished masterfully with the beasts. Many were shocked and routed by the simple use of massed trumpets, and the Roman infantry elaborately side-stepped the remaining elephants so they passed through their ranks. Hannibal’s cavalry were countered by Scipio’s, who this time were of better quality, and chased them from the field of battle. After a protracted and bloody infantry conflict, the Roman cavalry returned to strike the Carthaginian line in the rear. The battle was over: Hannibal had been defeated at last.

After the war, Hannibal took office as Chief Magistrate, and brought a measure of prosperity back to the bruised trading empire of Carthage. The Romans noted this, and seven years after Zama, they demanded he hand himself over. Hannibal promptly entered a self-imposed exile, where he continued to fight Roman rule where he could. After many adventures (and several further defeats), Hannibal took his own life by poison. His suicide note read: “Let us relieve the Romans from the anxiety they have so long experienced, since they think it tries their patience too much to wait for an old man's death.

Rome and Carthage both feature new civil tech-tree branches focused on diplomacy. Both sides begin with multiple allies and client states, and can undermine their opponents’ support by diplomatic means.

With a time period covering events between 218 - 202BC, each turn in Hannibal at the Gates represents a month, and the campaign transitions through all four seasons of the year, complete with seasonal gameplay effects.

Hannibal at the Gates adds two new Historical Battles: the Battle of Cannae (216BC) and the Battle of Zama (202BC). Both battles marked key points in the 2nd Punic War, with Cannae representing the high point of Hannibal's invasion of Italy, and Zama marking the completion of Rome's victory and dominance over Carthage.

In addition to mighty Carthage and Rome, players can fight the 2nd Punic War as three new factions: the Arevaci, the Lusitani and Syracuse, each one featuring its own faction traits, characteristics, unique units and campaign start-position. If Hannibal at the Gates is owned, these factions are also playable in the ROME II Grand Campaign.

Hannibal At The Gates Is Out Now