Most importantly, existing Rome II players will receive all of the above content via automatic update on the day of launch, upgrading them to Emperor Edition at no cost.

Mike Simpson, Creative Director of the Total War team, said: “Rome II was far and away our most ambitious game. We see more people playing, and playing for longer, than any other game in the Total War series. However, we take our players’ feedback very seriously. Through the multitude of improvements and free content updates we’ve brought to Rome II since its launch, we’ve worked hard to try and meet their expectations. We want Emperor Edition to be remembered as one of our finest games.”

The design of Emperor Edition was led by Jack Lusted, Development Lead of CA’s New Content Team. “With the Imperator Augustus Campaign Pack, we wanted to recreate the vast civil war which erupted after Julius Caesar’s murder”, said Lusted. “You can tackle the campaign as various Roman and non-Roman factions, including Armenia for the first time. Our aim was to represent the titanic power struggle that led to Octavian becoming the first Emperor of Rome. It’s a pretty epic campaign, and it’s great that we can offer this to existing Rome II players for free as a thanks for their support”.

The new ‘Imperator Augustus’ Campaign Pack adds hundreds of hours of sandbox gameplay across a new campaign map reflecting the geopolitical boundaries of the Second Triumvirate War. Players will determine the outcome of a vast civil war, which saw Octavian, Marc Antony and Lepidus vying to become the very first Emperor of Rome.

Imperator Augustus will be our biggest Campaign Pack to date, spanning across the entire Map of the Grand Campaign. The campaign starts in 41 BC at the height of the Second Triumvirate. Below you can see the start positions of all ten playable factions as well as the 65 minor, non-playable factions. Similar to the previous campaign packs Hannibal at The Gates and Caesar in Gaul one year during the campaign will consist of four turns per year. 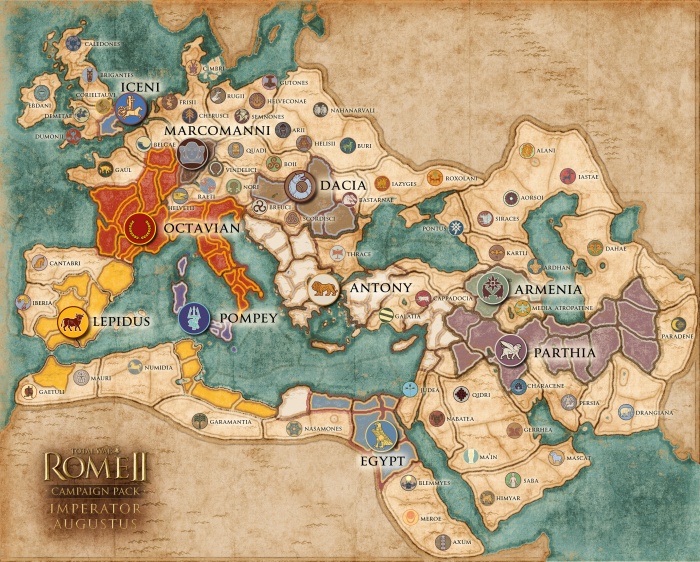 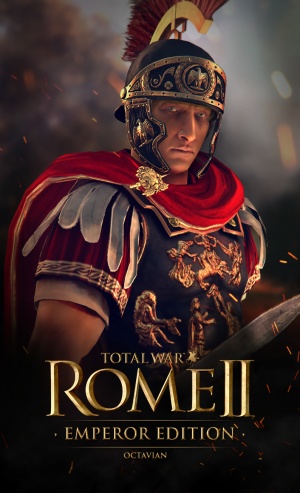 Caesar’s death cast Rome into a state of turmoil, but his keen Patrician mind had already considered the legacy he would leave. In his will, he named his great-nephew Gaius Octavian as his adopted son, and thus sole heir to Caesar’s assets.

In Octavian he had divined the soul of a shrewd statesman, and had he lived to see the aftermath of his own death, Caesar would not have been disappointed with his choice of successor. Octavian moved quickly to secure political stability by forming the Second Triumvirate with Marc Antony and Lepidus. The three-way dictatorship’s first act was to pursue Caesar’s principle assassins, Brutus and Cassius, and it was the combined forces of Marc Antony and Octavian who crushed the tyrannicides’ army at Philippi.

With the lands of Rome divided uneasily between them, it wasn’t long before the Triumvirate came to blows. Octavian dealt with both in turn, proving himself a master tactician in both statecraft and war. After Lepidus was driven into exile and Marc Antony took his own life in the court of Cleopatra after his disastrous defeat at Actium, Octavian was free to take control of the senate. From here, he built the framework that would transform Rome from a Republic into an Empire, and he its first Emperor. 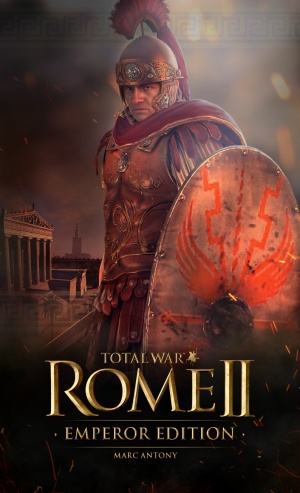 Augustus would become Rome’s first ever Emperor after crushing his great rival Marc Antony, both politically and then in battle. Do you have what it takes to form an Empire? Could you do better than Marc Antony?

Marc Antony was twenty years senior to Augustus (then Octavian). He had proved himself a staunch, loyal and superb general under Caesar during the Gallic Wars, and such service brought benefits. The two men became friends on that long campaign, and their growing professional and personal bond saw Antony dispatched to Rome in order to further Caesar’s ambitions, while securing his own political advancement.

As elected Quaestor, Antony managed the financial affairs of state, though he returned to Caesar’s side as cavalry commander at the Battle of Alesia, in which Vercingetorix was defeated once and for all. Elevated to the rank of Legate and with two legions under him, Antony continued to serve in Gaul until 50BC while Caesar’s forces mopped up the final pockets of Gallic resistance.

Political division was growing between Caesar, who had grown rich and popular with the people on his campaigns, and his co-consul Pompey, who had remained in Rome. Antony manoeuvred Rome’s religious and political infrastructures in order to protect Caesar, but open conflict was inevitable. On 10th January 49BC, Caesar and his forces crossed the Rubicon river to march directly on Rome. Pompey and the Optimates promptly fled, and Caesar entered Rome without incident.

By the time of Caesar’s murder, Marc Antony had fought many conflicts as his second-in-command, though his popularity with the people of Rome could never match that of his friend and leader. In the aftermath, he managed to retain a measure of Caesar’s forces – and his fortune, though the rightful property of Octavian – to become a powerful member of the Second Triumvirate. It wouldn’t be long before Octavian would rise to claim his birthright however… 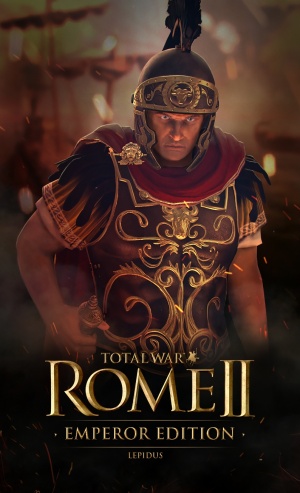 Caesar owed much to Marcus Aemilius Lepidus. After seizing Rome and leaving shortly after in pursuit of Pompey Magnus and his armies, he needed support in Rome, which Lepidus provided in ample measure. His loyalty to Caesar was beyond question.

Appointed to the office of Praetor in 49BC, Lepidus was left in nominal command of Rome while Caesar chased after his old co-consul. From this position, Lepidus was able to secure Dictatorship for Caesar in his absence, though Caesar soon resigned the role to become elected as sole Consul. Lepidus was rewarded with the Proconsulship of Hispania Citerior, where he distinguished himself in both military and diplomatic matters. Caesar’s last meal the night before his murder was as a guest at Lepidus’ house.

After his patron’s death, Lepidus was quick to offer the armed forces under his control in action against Brutus, but was dissuaded by Marc Antony. The two came to an agreement that left just one man of power to contend with: Octavian, Caesar’s adoptive son, and the heir to his legacy. The three met to discuss terms, and reached a compact which was formalised as The Second Triumvirate.

Lepidus took the role of Pontifex Maximus, and managed Rome’s affairs while Octavian and Antony left to pursue Caesar’s killers. While this seemed like the perfect outcome for Lepidus, he was clearly unaware of the sheer scale of Antony and Octavian’s individual ambitions…