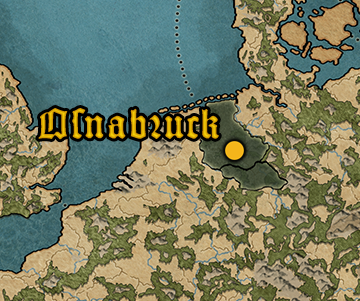 The Saxons were first mentioned by name in Ptolemy's 'Geographica' in 130 CE, with reference to the "Saxones" tribe north of the Elbe River. Originally from along the northern European coast, their name is derived from their characteristic weapon, the 'seax' dagger.

During the early stages of the Roman Empire, the Saxons were fragmented and tenacious, gradually spreading across Europe with no singular leader. After the Romans pulled out of Britannia at the beginning of the 5th century CE, many Saxons settled there in their stead, laying the foundations of what would eventually become England. Those who remained on the continental mainland came into contact with the Franks, who went on to shape their destiny significantly. United under Clovis, the Franks brought much of Gaul under their control. This included Saxon tribes who, although subjugated, were able to remain largely independent, separated from their Frankish overlords and foes by the Harz and Hesse mountain ranges.

The Saxons still fiercely defend their pagan beliefs, upholding them despite determined advances from the Christian Franks. Two priests - both named Ewald - recently sent to convert them to Christianity, were instead been brutally murdered, dismembered and cast into the Rhine. The Saxons also raid their neighbours relentlessly, further drawing the ire of their western overlords.

Now Charlemagne has been crowned king of the Franks, his attention has turned to rebellious Saxon attitudes, and their unacceptable adherence to paganism. Led by their uncompromising king, Widukind, there will be no surrendering of Saxon beliefs - or of Saxon lands. Tyr will guide his people to ultimate victory!

Income: +100% from sacking, looting and raiding

The following is an unofficial video by community member AlexTheRambler and as such any views or opinions expressed in it are those of the creator and do not necessarily represent the views or opinions of Creative Assembly or SEGA. If you like their video, please consider subscribing to their channel!