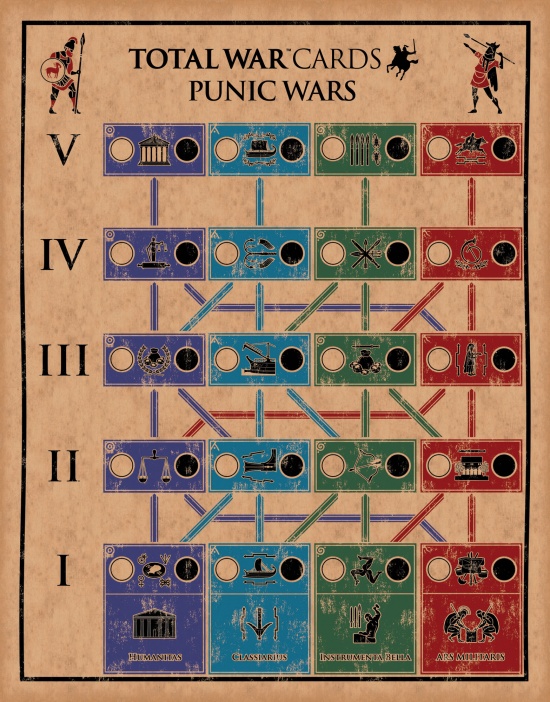 [Right-Click and "Save link as..." here to download your very own tech tree!]

Punic Wars is a two-player card game, in which the players represent Rome and Carthage in a battle for dominance in the Mediterranean. Players must skillfully use their resources, represented by army cards, to conquer lands and gain tactical advantage through the development of new technologies. Points are scored according to the combinations of Territory each player captures. After six turns of play, the scores are added up, and a winner declared.

There are four regions in the Mediterranean (Gaul, Iberia, Italia & Africa) which players will compete with their armies to capture. Each region has eight Territory cards in the deck.

Connected with each branch of the Tech Tree is a Special Ability Card that offers a tactical advantage to the holding player:

The player who progresses furthest up each branch of the Tech Tree at any given time gains control of the associated Special Ability Card during the Resolution Phase. Players record their progress up the Tech Tree with Tabula game pieces.

Observe any entitlements granted by Special Ability Cards. Players then alternate in placing a single Army Card either:

-Face up next to a Territory card. Territory Cards are scored in a specific manner (see Ending The Game And Scoring). Players take it in turns to place Army Cards against territories one at a time, but through the course of a turn, multiple cards from both players may be stacked against a Territory Card. Players should play their Army Cards either side of a Territory Card to keep their committed forces visually separate from their opponent’s.

-Next to the Tech Tree, instantly gaining one or more technologies depending on the value of the card placed. A player may expend as many resources as he wishes over the course of a game-turn to advance technologies.

If by getting a new technology you reach a higher tier in that technology branch than your opponent, the associated Special Ability Card will become yours in the Upkeep Phase. If you overspend on a tech, any excess resources are lost.

After all Army Cards have been played, the turn resolution takes place. Reveal all face down cards, both Land and Army. The player with the highest combined Army Card score against each Territory Card claims that Territory Card.

In the event of a draw, the player with the Instrumenta Bella Special Ability Card can choose one drawn contest and win that Territory Card. If there are other drawn combats, the relevant Territory Cards remain in play and are contested again next turn (Note that the following turn, the full complement of five Territory Cards must still be dealt).

IBERIA Score the face value (the number of ships) of each card from 1-8.

AFRICA Score 7 points for each matched pair of Merchant and Trade Route. Lone cards score nothing.