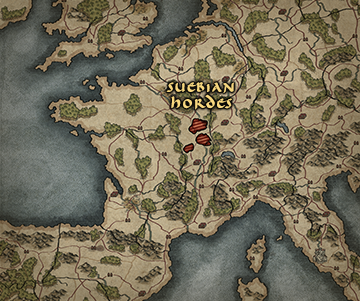 A confederation of many small tribal groups who speak the same Germanic dialect, worship the same gods, and share an abiding interest in raiding their neighbours, the Suebi are an extremely warlike people. Warfare is all in Suebi society, with successful warriors rising to exalted, powerful positions within their tribes. To distinguish themselves from their slaves, Suebi freemen and warriors sport a topknot that adds to their height and generally fearsome appearance, known as the ‘Suebian knot’ was even more elaborate, making them clearly visible on the battlefield.

For many years the Suebi’s targets were the Celtic tribes across the Rhine, and then the Roman province of Gaul, once it became part of the Empire. Having fought against the Emperor Marcus Aurelius east of the Alps and been pushed back, the Suebi eventually joined the Alamanic tribal alliance during the 3rd century CE. This new confederation occupied the frontier region of Agri Decumates in the Black Forest – which is still known as Swabia to this day.

Now the Vandals and Alans have begun to migrate westwards, through Suebian territory – probably due to pressure from the savage, nomadic Huns - many Suebian tribes have joined their migration, crossing the River Rhine into northern Gaul to pillage its many wealthy Imperial cities. For many Suebi their destiny lies there, and the rich pickings of the so-called ‘civilised’ world are the spoils of their supremacy!