The Suebi are an indomitable Germanic culture dwelling to the north east of Gaul. Not a single people, but rather numerous tribes sharing a common language and similar religious beliefs, they frequently raid their Gallic neighbours across the Rhine.

Heavily reliant on infantry and ambush tactics, raiding is their predominant form of conflict. Lightly equipped, most Suebi warriors make use of the framea, a javelin-like spear, as swords are a rarity. Often unarmoured they carried their rounded, oval or long, hexagonal shields into battle and wore little more than simple cloaks or other garments at times.

However, their fighting prowess is legendary and their warriors rightly feared. Even the stoutest centurion would tremble at the sight of a charging band of Berserkers – or feel the icy hand of fear clutching his heart when the sinister, black-painted Night Hunters spring from the forests.

Fairly isolationist, Julius Caesar wrote that there was a paucity of trade outside of the Germanic tribes themselves, occurring only if a surplus of loot or slaves were available. To distinguish themselves from their slaves, freemen and warriors wear a form of topknot that has come to be known as a Suebian knot. Their kings, chiefs and champions sport even more elaborate versions of this same hairstyle.

Given such ostentatious displays, standing out in battle is important. Kings and chiefs, although drawn from elite lineages, are elected, making their continuation of heroic traditions essential in uniting the tribes.

Under the right leadership, The Suebi have the potential to unite to a single purpose, and Britannia, Gaul, and Iberia could easily be swept away under the weight of their numbers…

Like other Germanic factions, the Suebi are masters of forest warfare and plunder. Stemming from a confederation of smaller Germanic tribes, they have a diplomatic edge when dealing with other barbarians and excel at fighting lesser tribes who dare to stand in their way. They feel disdain for outsiders, civilised cultures and other barbarians alike, and must contend with considerable resistance from those whom they conquer. 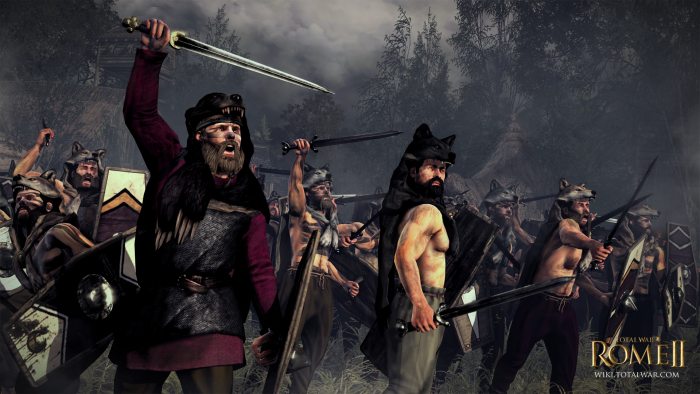