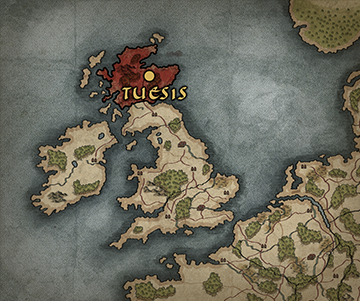 The Picts are resolute defenders of their homeland, which lies at the far north of the Britannic Isles. The Romans tried for many years to bring them under control - the Emperors Hadrian and Antoninus even resorting to building walls across the country in order to control the passage of, and trade between, Imperial subjects and the savage, tenacious "northmen". The general focus on defence during Hadrian's tenure has led some to the notion that his wall was more than a mere trade gateway - it was intended to keep the Picts and other Caledonian peoples out.

Broadly, the Picts remain an enigmatic people who left no written records behind. However, we know they fought hard and against the invaders because the Roman historian Tacitus made specific references to their defiance in his 'Histories'. It is also likely that 'Picti' (in Latin) was simply a general term used by the Romans for any number of northern tribes whom they considered "painted ones", in reference to the common Celtic tribal custom of tattooing and painting the body before battle.

The Picts were part of the ill-fated Great Conspiracy of 367 - 368 CE, when barbarian raids were co-ordinated with the desertion of the Roman garrison along Hadrian's Wall, and almost succeeded in wresting power from the Empire in Britannia and northern Gaul. Now, on the cusp of the 5th century CE, the Picts must rekindle old alliances if they wish to take their country back. Britannia, and indeed the Empire at-large, awaits the outcome - could this be the beginning of a unified Celtic empire in the north, one that will sweep away Roman oppression once and for all?