The ascension to power of Arsaces, leader of the Parni tribe, assured them victory against the Seleucid protectorate of Parthava, who had been weakened in their attempts to break free of Greco-Macedonian rule. Thus began the rise of Parthia, an eastern empire comparable to the Achaemenid dynasty of old and one of the few who came close to matching the power and wealth of Rome.

A confederation of tribes, Parthia is famed for its horses, nomadic horse-archers and heavy cavalry, the latter developing distinctive bronze or iron scaled armour which covers both horse and rider. For its infantry it relies on ethnic Persian/Iranian hillmen, spear and skirmisher units and sometimes mercenaries, armed and drilled in the Seleucid fashion.

Blending Persian, Hellenistic and local cultures, Parthia’s religious practices and philosophies include veneration of both Greek and Iranian Gods, and the practice of Zoroastrianism. Over time, a noble elite has developed, holding key areas of agricultural land upon which the economy is based, while trade via the emerging Silk Road enables its agents to move easily throughout the ancient world.

As an Eastern faction, Parthia profits from the rich heritage established by the Persian Empire both in its capacity for trade and in its cultural strength. A degree of tolerance for foreign cultures further eases Parthian conquest of new lands, but their Zoroastrian practices mean an aversion to slavery, which is detrimental to both the economy and to public order. In battle, their great marksmanship and mastery of cavalry makes them a force to be reckoned with when fighting on open ground. 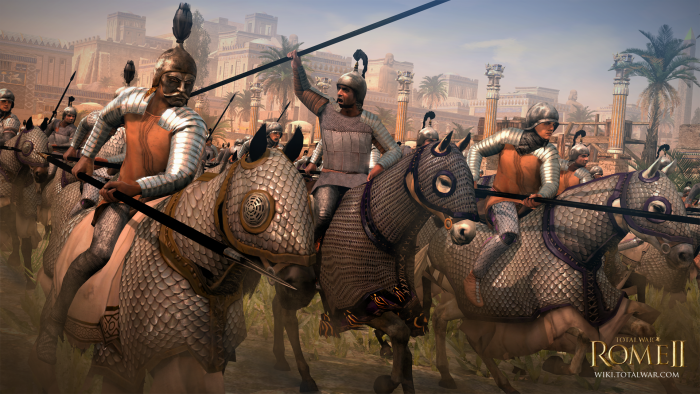