On the ninth day of Festag...

..we have a Dwarf building tree to show you! 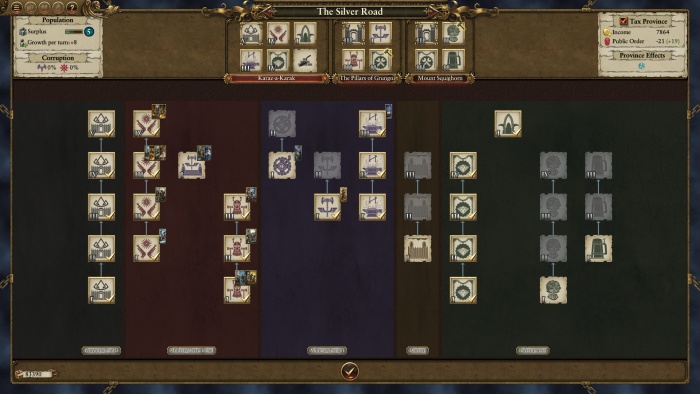 Check out the Dwarf building tree from Total War: WARHAMMER!

"In Dwarf society, guilds have a very prominent role. There are guilds for everything, ranging from various craftsmen guilds that produce products of value, such as the gemcutters guild and brewing guild, to the well-respected Engineers and Runesmiths. You'll find the halls of many of the Dwarfen guilds in the building tree to bolster your economy and support your troops.

"Dwarfs lack the stature for mounted warfare, though none would be foolish enough to say so to their faces, and this is reflected in the buildings they construct, which lack cavalry buildings. Instead they have three building chains that recruit infantry - one basic infantry chain for their core troops such as Dwarf Warriors, Miners and Longbeards and two specialized chains for the recruitment of elite infantry such as Ironbreakers, Hammerers and Slayers. Dwarfs are of course renowned for their warmachines, so they have a long chain that produces their state-of-the-art artillery units.

"Unlike the more primitive Greenskins, Dwarfs are a race that typically requires you to have two buildings present to recruit the high-end units. So if you want Ironbreakers, you'll both need their recruitment building as well as a Gromril Forge, which can be found in the smith chain. If you have just the first level of smith building present, you'll notice that your basic recruitment building will also be able to recruit units with great weapons, which are devastating to the heavily-armoured foes that typically from the midgame onwards."