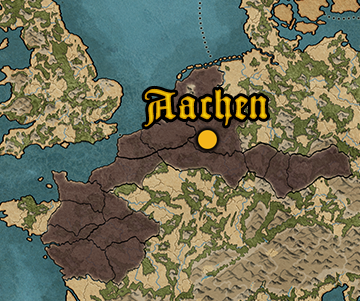 Charlemagne is king of the Franks; he has fought both friend and foe alike to make that so. The kingdom he has inherited, on the cusp of greatness, is due to the work of his forebears - the progenitors of Carolingian ascendancy.

Charlemagne's grandfather, Charles Martel, was a powerful mayor of the palace of Austrasia under the last Merovingian kings - and effectively regent to their weak, indolent rule. Having led the Franks to victory at the Battle of Tours in 732 CE, he halted the seemingly endless Muslim advance and relegating their activities to Iberia. This victory established Carolingian power within the Frankish Kingdom, further diminishing the rule of the failing Merovingians. Charles' son, and Charlemagne's father, Pepin, ultimately deposed the final Merovingian king, Childeric III, and was crowned the first of the Carolingian monarchs with the consent of Pope Zacharius. Pepin put paid to the Lombards, twice evicted from the Duchy of Rome's territory. This led to the 'Donation of Pepin', a handover of land to the Pope which led to the establishment of the powerful Papal States.

However, Pepin's death has created a power vacuum that has compromised the structure of the kingdom; its rule is now split between Charlemagne and his brother, Carloman. The two brothers, clearly, do not like each other; both laying claim to be Pepin's sole heir.

Now, in 768 CE, Carloman is surrounded. He holds the more defensible territory but Charlemagne, a distinguished warrior king, controls the wealth and therefore wields the real power. His Frankish Kingdom, as such, now stands strong. Although there are enemies aplenty at the borders, the Franks must first be united before they defeat them. Once that has been achieved, all Europe will embrace the true religion or face death at his hands!

The following is an unofficial video by community member Lionheartx10 and as such any views or opinions expressed in it are those of the creator and do not necessarily represent the views or opinions of Creative Assembly or SEGA. If you like their video, please consider subscribing to their channel!