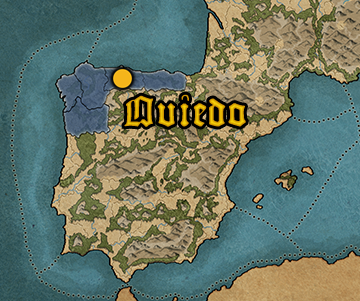 In the northwest of Iberia, along the Cantabrian mountains, the Asturias stand tall. Although the Visigoths have been destroyed and their kingdom shattered, their spirit lives on.

The Kingdom of Asturias began in the Roman province of Gallaecia, a melting pot of tribes during antiquity. During the fall of the Roman Empire, Asturian an identity was formed through their constant feuding between the rival Visigoths and Suebi. When the Umayyad Caliphate invaded Iberia in 711 CE, the Visigoths buckled; their king was betrayed and murdered, and the Muslim invaders stormed the south of the Peninsula, almost wiping out the remainder of the Visigothic aristocracy. Yet a surviving nobleman, Pelagio, fled to Asturias, where he began to resist the Caliphate, leading Christian forces to victory over the Muslims at the Battle of Covadonga in 722 CE; a turning point in the struggle - essentially the beginning of the Reconquista. Pelagio's resultant power structure endured, lasting until after his death in 737 CE. His successors, Alphonse and Fruela, extended Asturian borders further. This period was also known for the construction of splendid Asturian architecture, with basilicas and monuments appearing across the region. Fruela, nevertheless, was known as "Fruela the Cruel" after he assassinated his brother in order to gain total control.

Now, Fruela's cruel hubris has earned, in turn, his death at the hands of a disgruntled cousin, Aurelius, who has ascended to the throne in his place. To the south, the newly-formed Emirate of Cordoba is showing great determination under its new leadership. Fortunately, to the north Asturias' staunch Christian allies - the Franks - can be relied upon to stand against the Islamic hordes. Asturias, on the front line, must remain firm against this onslaught and emerge, as it always has done, victorious!

Can raze and abandon settlements

The following is an unofficial video by community member MalakithSkadi and as such any views or opinions expressed in it are those of the creator and do not necessarily represent the views or opinions of Creative Assembly or SEGA. If you like their video, please consider subscribing to their channel!