Ptolemaic Egypt has close cultural ties to the Hellenistic world, while maintaining many Egyptian traditions. Founded by Ptolemy in 305 BCE following the death of Alexander the Great, it has become a centre of culture and trade under the influence of its Macedonian rulers.

A general under Alexander, Ptolemy was appointed to govern Egypt after his king’s sudden demise. With Alexander’s empire fragmenting, Ptolemy declared his independence, securing Egypt against his power-grabbing rival generals during the Wars of the Successors (322 - 275 BCE).

Embracing Egyptian religion and customs, the Ptolemies have since made themselves Pharaohs, continuing the long engineering tradition of great temple and monument building. Greek culture and learning are actively encouraged however, and an upper class of Greco-Egyptians has emerged. But things are not always harmonious; with Greek units garrisoned and veterans settling throughout the territory, the privileges of Greek citizens have led to frequent and bloody uprisings by the indigenous people.

The intermingling of Greek and Egyptian fighting styles provides the Ptolemaic Pharaohs with a military that is both advanced and balanced, yet still honours the role of the champion commander. Making great use of spear and pike, their forces are further diversified with skilled swordsmen, scythed chariots, and more exotic units such as African war elephants. Egypt's position on the Mediterranean Sea also requires a substantial navy to protect its colonial and trade interests.

While Alexandria has become a beacon of civilisation and learning, its rulers are power-hungry opportunists. This new dynasty may yet expand its territory and influence further – perhaps to unify the Greek-speaking peoples? Or west, to carry out Alexander's threatened conquest of Carthage?

As a Successor Kingdom, Ptolemaic Egypt is progressive and forward-looking. They are skilled statesmen and academics, and their naval prowess is unquestioned. However, as a recently established dynasty on foreign soil, the native Egyptians will take some convincing as to the value of their new rulers… 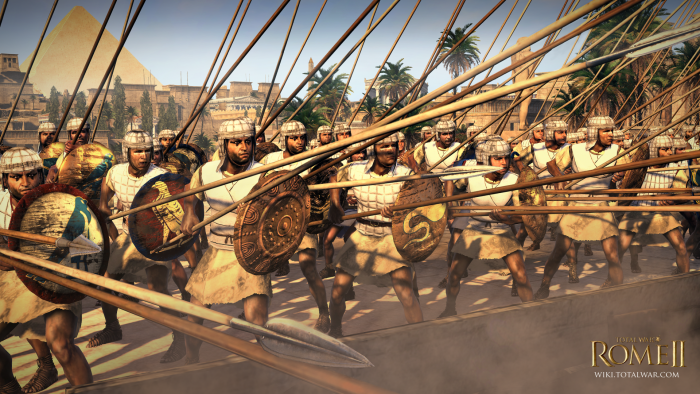