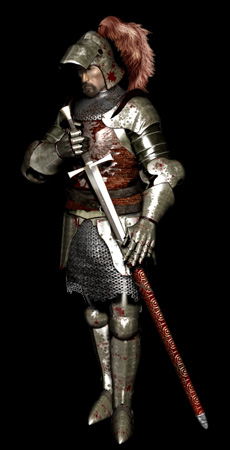 Experience the middle Ages in all their blood-soaked magnificence.

From the lush grasslands of Western Europe to the arid deserts of Northern Africa, from the first Crusade to the fall of Constantinople, implement diplomacy, utilise trade, espionage and assassinations, spread your religion and wage total war in order to expand your influence and secure your reign as you build a dynastic empire to stretch across four centuries.

Medieval: Total War is the follow on from 2000’s Shogun: Total War. As with Shogun the game is split into two sections – the turn-based campaign map wherein the player is required to make strategic decisions, recruit and move armies, besiege settlements, fight naval battles and employ agents such as emissaries, spies and assassins to aid with diplomacy, offer alliances or bribes, or execute rather more clandestine actions. Religion is important in the game and whether a faction is Muslim, Orthodox or Christian will affect allegiances and public loyalty – as a catholic nation the player must carry out the wishes of the Papal States, embarking on a holy war if need be or else run the risk of excommunication. If public order and loyalty should fall too low in a particular region a rebellion or a civil war may occur – in these situations the player may decide to side with the rebels or the current rulers to quell the rebellion or overthrow a tyrannous regime. 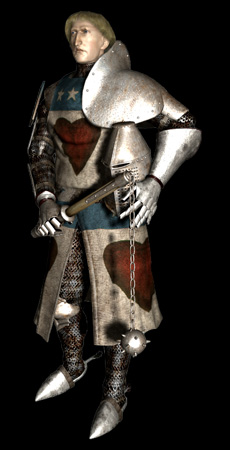 When conflicts do arise either let the computer solve it automatically, or take command of your armies in real-time in massive, tactical 3D battles. Over 400 region-specific maps, improved AI and over 100 unique, contemporarily accurate unit types each with their own strengths and specialties allow for hundreds of tactical permutations and ensure a high variety of gameplay and necessitate the use of medieval tactics and formations. An increased maximum troop count of 10,000 permits for battles of a truly epic scale and new siege systems allow you to fight your way through a defending enemy’s castle walls in order to take control of the land.

Choose from fourteen playable factions, choose a time period and fight your way across Europe, the Middle East and Northern Africa. Relive classic battles such as the Hundred Years War or re-write history as you see fit. A variety of generals rally and lead each faction’s army, some with royal blood and a claim to the throne, others members of the nobility. Important historical characters such as Richard the Lionheart and Thomas Beckett can occasionally be trained, providing the player with highly capable or exceptionally pious generals or emissaries to aid their war effort. A ‘Vice and Virtues’ system has been introduced in order to make these characters more true-to-life. This means that how a character is conducted on the campaign map and battlefield, be it in a merciful or a ruthless fashion, will affect their attributes and the way they are viewed by others. All units gain experience from battles they survive in the form of ‘Valour’ which causes them to become battle-hardened veterans with markedly better combat effectiveness. Units on the battlefield also have ‘Morale’, indicating the mood of the unit. Bolstered by factors such as fighting alongside a brave general and diminished by sustaining heavy casualties, ‘Morale’ can be the difference between winning decisively and scattered troops running for their lives. Capture routing enemy troops and ransom them to their leaders. Captured generals will fetch a much higher price.

The game also features a multiplayer mode wherein up to seven human players can compete online on the same map.

The second game in the Total War series, Medieval: Total War was released on 30th August 2002 by the Creative Assembly and Activision.