The Finer Points of Conquest

Greetings, everyone – Pete again! Today I’m here to discuss with you the sprawling diplomatic scene of Attila. We recently released our ‘White Horse’ trailer which establishes the scene of the western world – Rome is split, the Sassanids appear stoic, and the tribes push upon every border. There is battle and war, but even as the world falls to madness, the institutions of diplomacy and civil discussion stand tall. In fact, it’s possible that now more than ever, the art of diplomacy will be required to stop the decline of the civilized world, and aid your conquest across the changing landscape.

Diplomacy in Attila has been made more robust in several important ways. As well as that, there are a couple of additions to the diplomatic repertoire that are worth mentioning.

So, without further ado, let’s get to it!

Yes! Marriage is making its triumphant, ceremonial return in Attila, with all the triumph and beauty that wedding someone off without their consent or approval can manage. People, in antiquity, were as equally valuable bargaining chips as money, and so the exchange of daughters becomes a powerful weapon in your diplomatic arsenal. 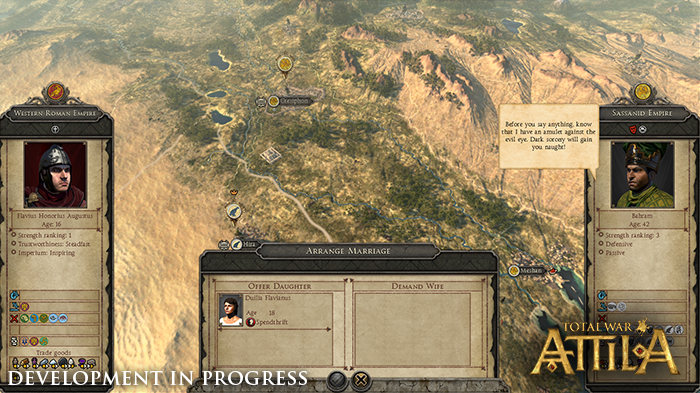 Yes I’m sure he’s lovely. Look at his face! It’s a kind face.

Marriage carries a hefty diplomatic modifier on it, so offering one of your daughters as a sweetener, or indeed as the main event in a diplomatic situation, is a strong incentive for the nation you are treating with. Marriage can be a potent tool in arranging peace after years of long, bitter war (assuming that the daughter you offer is lovely enough, of course) or improve ailing relations with a faction you once called friends or neighbours. Whatever personal struggles the newlyweds will encounter in the rest of their – admittedly very likely short – lives together is irrelevant in the face of the happiness it will bring both your nation and theirs (I am a romantic man).

Additionally, marriage will feed back into the Family Tree system, as outlined in the first Attila Spotlight video, which will show who in your family is tied to which faction via marriage, and whether anyone in your family tree is from another faction via marriage. This is important in telling which general is tying you to whom, and whether or not their continued survival is integral to relations with others.

You can also request the marriage of one of the opposing faction’s kin, but that carries a difficultly curve – people are not willing to part with their children as easily as you are, it would seem, unless you are offering a particularly juicy diplomatic exchange for their hand (and, hopefully, the rest of them).

Marriage opens up a new possibility, and perhaps your only resort, when the situation seems dire. With enemies closing in from all sides and not much left to appease them with, perhaps your best and brightest (and least plague-ridden) daughter can bridge the rift between you and another faction, creating ties that bind a lasting peace. Or, at the very least, one that lasts long enough for you to prepare for the resurgence of hostilities (I remain a romantic man).

Ah, yes, the trusty agent; diabolical destroyer, pyromaniacal arsonist, cunning litigator, advisor, confidant and rogue. The shady underworld of your campaign lies at the feet of these men and women. When swords and battle cannot undo your foe, your agents will see it done. 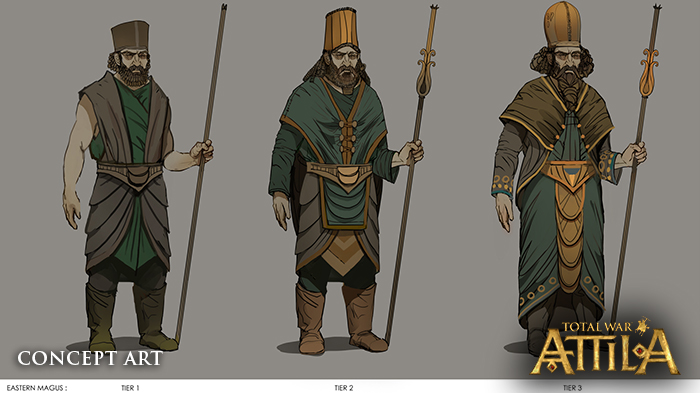 The Agents in Rome II were capable fellows from the start, able to move wherever they pleased and act upon any army, settlement or foreign agent they encountered. Although the chance of success was initially limited at lower levels, the Agent could still have a go at it (with hilarious and often fatal results) – nothing was beyond your agent’s reach.

In Attila, things have changed somewhat. From the start, your Agents will not be able to achieve everything or attempt to do everything to everyone – perhaps some will be unable to act on settlements, or agents, or even armies. That kind of skill has to be developed by using your agents and levelling them up. Between the three agent types, you will be able to act on everything, but one single agent no longer can. Through the levelling process they will unlock their roster of skills and become not only more adept, but versatile tools in your arsenal, able to deploy more effectively against your adversaries. A fully levelled agent may be able to act in some way on every target, but even then that’s not guaranteed. An agent, like a general and indeed like any of us, must build skill and expertise over time. Even the most prodigious, well-trained of us had to start at the bottom of the rung in terms of practical skill and experience. 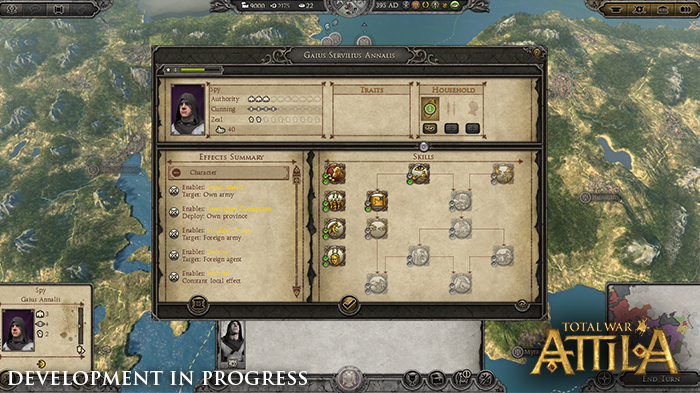 Imagine it like a tree. Or a web. Actually, not a web. Forget that. Stick to a tree. Branches.

Allow me to break it down further for you. Imagine we’re the Sassanid Empire, and we have one of every agent type – a priest, a spy and a champion. All of which are freshly recruited, with no levels, and they can act thusly:

My priest (Magus) can affect my own provinces by acting on them, and can also act on other agents to try and convert/neutralise them. He can also encourage dissent or, if he’s lucky, revolution in foreign settlements. He is, currently, unable to act in any way on any armies – neither mine nor foreign forces.

My spy (Investigator) can act upon enemy armies and deceive enemy agents, slowing them down. No actions can yet be used on armies or settlements.

My champion can attack any foreign character (that is, agents or generals), and also can perform military training on my own armies. They cannot act on enemy settlements or enemy armies.

So as you see at level 1 these agents can, between them, act on every type of character, army and settlement and affect the entire game world. But alone, they are much more specific. As you level them up along the skill tree, they unlock new abilities that give them more versatility – the ability for my spy to act on enemy armies, for instance, or for my champion to help out in my settlements. The change is to help facilitate a more judicious approach to your agents. Although an agent can, by the end of their skill tree, affect a great swathe of the game world, there is the possibility that they cannot affect everything, whereas a host of well-specialised agents can be primed to deal with any developing situation across your entire empire.

Although working as clandestine as they can, agents remain a part of the growing diplomatic landscape of the campaign, however, and actions carried out all have ramifications. An assassination carried out against an allied faction, for instance, will have obvious and immediate diplomatic repercussions, so it is best to tread with caution.

A host of agents, all adept at certain things, rather than one mega agent, destroyer of worlds, will hopefully help you to better organise your forces and agents across your empire and employ them where they are needed – where their expertise can be most effectively brought to bear. A fully levelled agent can hold their own in almost any situation, and the skill tree system allows you to specialise them in ways appropriate to your needs. An expert agent still has its value, and losing one will still cause you to swear out loud, but the focus on creating a larger subterfuge network will let you manage your forces better, deploy agents where they are needed with greater efficiency, and build a web of spies, champions and priests that combined can achieve anything. 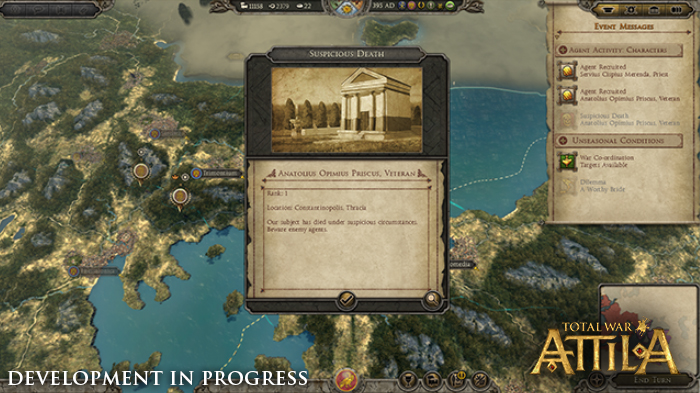 Of course, they can still fail. Horribly

Anyway, that’s all for now – thus concludes another dev blog; I hope you enjoyed it! Here’s to next time!

Your world will burn, love, etc,