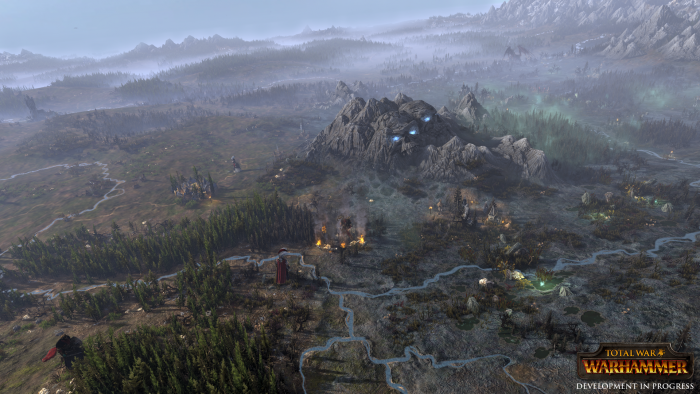 In previous blogs and videos, we have shown the ruinous effects that Chaos corruption can bring to the landscape of the Old World, and today Campaign Designer Eva Jobse is going to talk about a more subtle and sinister form of corruption: Vampiric influence.

Vampires are corrupt creatures by nature, their undead bodies sustained by Dark Magic and the blood of their victims. It is the nature of Dark Magic to be drawn to itself, and as more and more of these foul energies accumulate, the land itself becomes blighted and accursed. Trees wither and a miasma of balefire smoke rolls across the landscape. Skies darken and the spirits of the dead stir, shrieking and clawing at any living trespassers that dare venture into these wretched lands.

Unfortunately for the living, Vampiric corruption is not constrained to the sinister realms of Sylvania and Mousillon. As the Vampires and their underlings spread, their influence does also. Vampire Counts Heroes such as Necromancers and Banshees, are the vanguard. Operating under the cover of darkness, they can infiltrate the realms of men and perform foul rituals that draw Dark Magic into the lands. The inhabitants will soon find that their crops start to fail as putrid bogs form in their fields and bloodthirsty abominations are glimpsed in their once peaceful forests. Villagers go missing in the nights and terrifying screams can be heard in the darkness. As starvation and terror takes its toll, slowly but surely society collapses and the land itself turns into stuff of nightmare.

In short, the presence of Vampiric corruption causes problems to the public order in provinces belonging to living races and any living army in a region under the dark influence of Vampires will suffer attrition. Should an uprising occur in a region with a large amount of Vampiric Corruption, a Necromancer may appear, unleashing the dead upon the living.

To Vampire Counts-controlled provinces, maintaining high corruption is essential, as it represents how well the Vampires are controlling the remainder of the living populace. Vampires have a unique trait called "Obedience to the Vampires", meaning that for every ten percent of Vampiric corruption present in a province, they gain one point of public order. This is both a blessing and a curse, as it means that a Vampire's stranglehold on a province may collapse if the corruption is somehow removed. Heroes such as Witch Hunters are specialised in this, so it is important that Vampire players do not let them roam their lands for long.

Vampires have several tools at their disposal for spreading their influence. First they can use their armies and Heroes, as any of these will passively spread corruption in their region. Some skills, traits and items may further increase the intensity of the corruption that is spread by the character possessing them. In addition, the Vampire Counts may order the construction of Balefires, their unholy flames spreading withering smoke that blights the lands. Larger Balefire buildings can even spread this taint to adjacent provinces, into foreign lands. Last but not least, through studying necromantic tomes, the Vampire Counts may learn incantations allowing them to spread their influence.

Living races have some tools as well to combat this fell influence, as they can construct shrines, shaman hovels and temples to keep the darkness at bay. Here they may recruit their own Heroes that automatically counter corruption where they detect it.

Total War: WARHAMMER also features some dynamic events, the outcome of which may cause or remove corruption.

All these factors combined determine the total percentage of corruption that the province will trend towards. If there is a Vampire Hero providing three points of Vampiric influence in an Empire region with a Shrine of Sigmar that provides four points of anti-corruption, while there is an event active that produces one point of Chaos corruption, then the total is eight, so 1 point means 12.5% Chaos corruption and 3 points will eventually result in 37.5% Vampire corruption. It will take several turns before the corruption levels adjust however.

Since spreading corruption is slower than sending an army over to conquer an enemy city, it should be used intelligently. The major advantage of corruption is that it does not cause any diplomatic penalty. This means you can use it to undermine factions that are neutral, or even friendly, towards you, without resorting to open war in which the faction's allies are likely to get involved as well. The Vampire Counts are scheming masters of deceit, and alliances with the living are considered nothing more than a temporary convenience, after all...