The Architecture of the Empire

Total War: WARHAMMER takes place in a world unlike any we’ve ever attempted to create in a Total War game. Here you’ll meet legendary lords, encounter ingenious battle machines and monstrous beasts that soar through the air and shake the ground. This is a world where the physical laws that govern our own have been twisted. A world where magic is possible.

This is a big opportunity to explore new and exciting possibilities, both in terms of gameplay and art direction. Whether on the battlefield or on the campaign map, we really want to convey the rich and distinct personalities of each playable Race, including the unique style of their settlements. 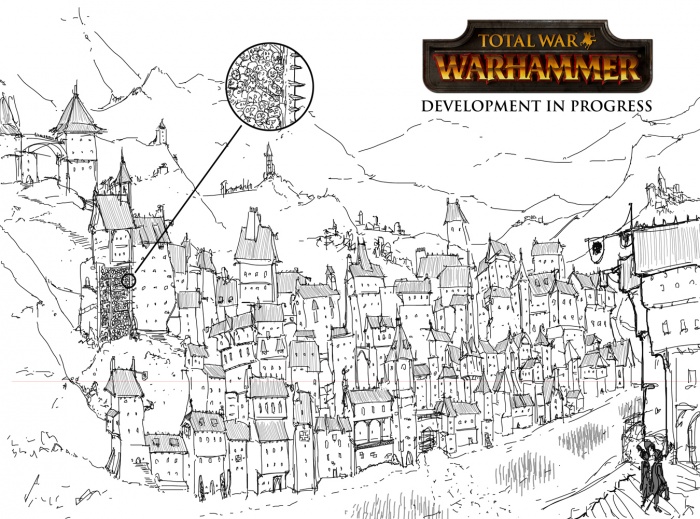 For instance, all buildings are designed to reflect their Race’s visual style, circumstance and disposition. We’ve taken inspiration from Games Workshop’s fantastic building miniatures for Warhammer Fantasy Battles table top, as well as references in literature and illustration. This offered a great foundation but there’s still much more needed to create the full, authentic experience we’re aiming to deliver in Total War: WARHAMMER.

We use concept art and 3D experiments to feel out how we can build on the architectural conventions that are already established within the lore and, working with a Fantasy setting for the first time, we have to remind ourselves to push ideas further, beyond the realm of reality.

With that in mind, this is the first time we’ve been able to create buildings which don’t have to, for example, adhere to the rules of gravity, allowing for impossible constructions where being visually interesting is more important than being structurally sound.

When it comes to the Empire, they are an industrious and hardy people, and are quite advanced for the age. Their dilapidated buildings draw influence from 16th Century Germanic architecture with hints of the Gothic, fantastically exaggerated: tall, narrow constructions with steep roofs sprouting smoking chimneys, pin-pricked with spikes. 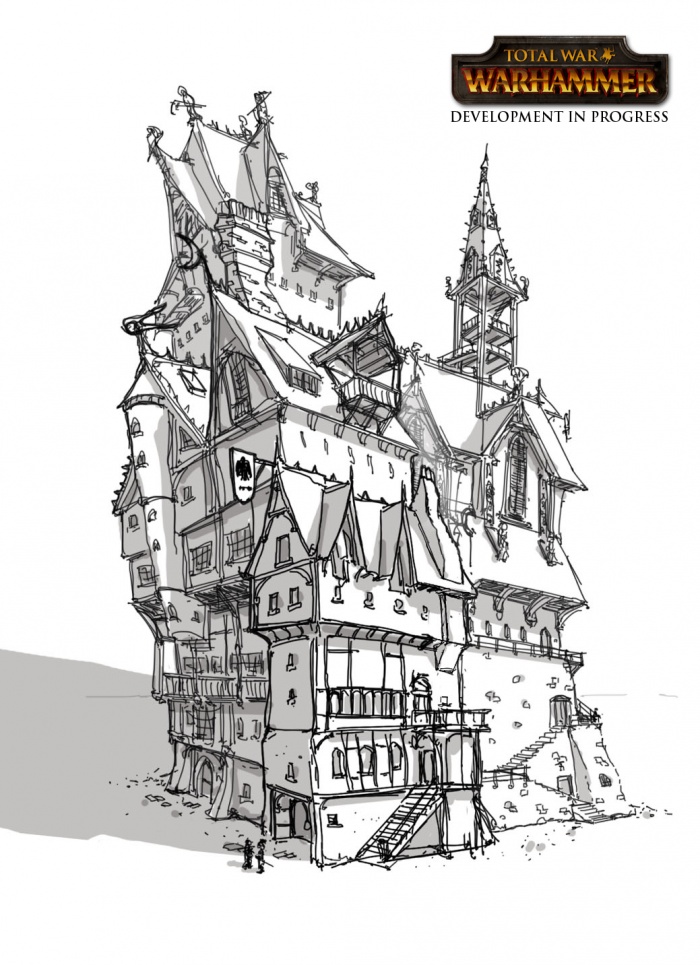 Many dangers roam the land outside cities of the Empire and few dare to reside beyond their great walls. As such, the cities have become beacons of relative safety where the majority of the Empire’s citizens live their lives. Populations have grown, and overcrowding has begun to mould and shape settlements. The Empire, long having been on a war footing, have had to put town planning to the back of their minds somewhat. 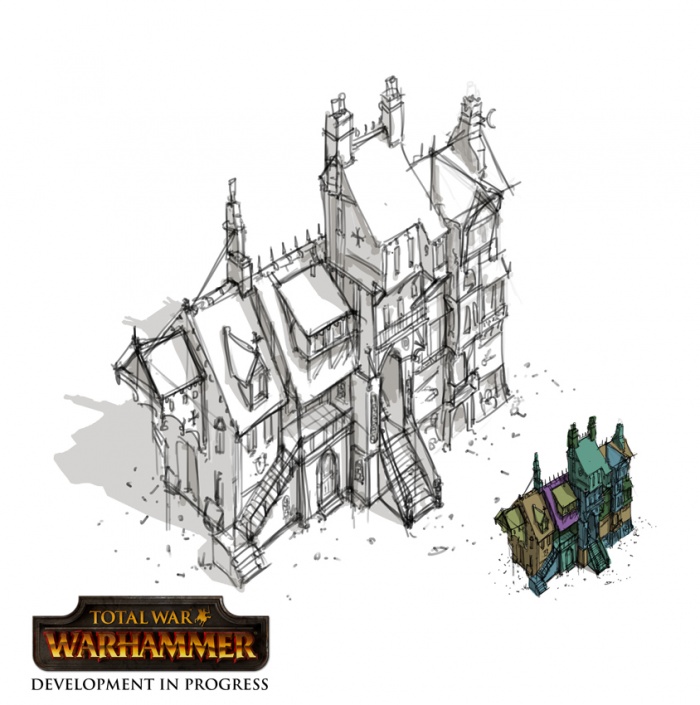 The result is cities that are teeming with life, where every square inch is valuable, and where citizens have had to build upwards and on top of each other. Crooked platforms, spires and towers reach precariously towards the sky, changing and growing organically as parts break or new additions are made whenever usable salvage can be found. 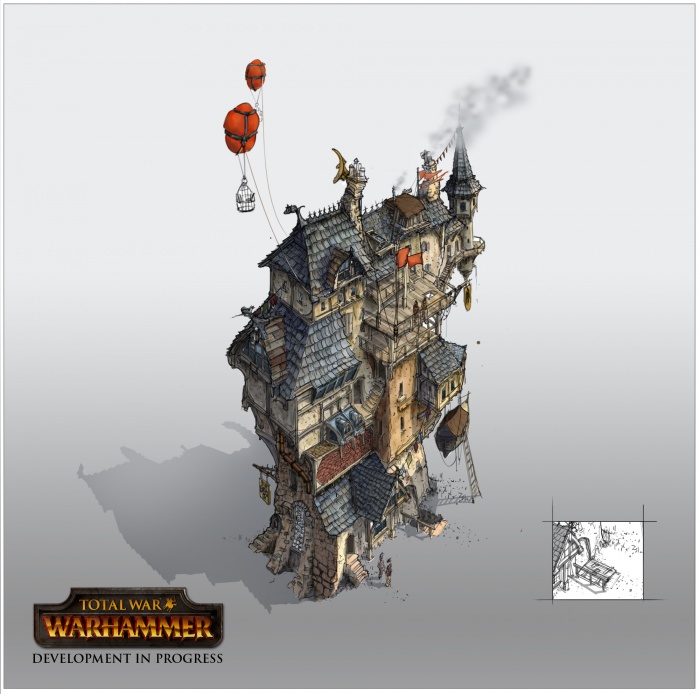 Some of the buildings show embellishments, echoing insignia seen on unit armour. Symbols of the Empire and the Cult of Sigmar signify the pride and strength of the nation. Skulls, iconography of Morr, serve as macabre reminders both of the ability of the Empire to despatch their enemies, but also of the horrors that threaten to destroy them.

The settlements show all the signs of a nation constantly at war. Thick smoke bellows from industrial workhouses and forges, busy making weapons to support the war effort. Grime, cramped living conditions and rat-holes make it clear squalor and crime are rife. Improvised reinforcements against collapse and awkward extensions that jut out at odd angles show the make-do and mend attitude of its people, as well as their ingenuity. 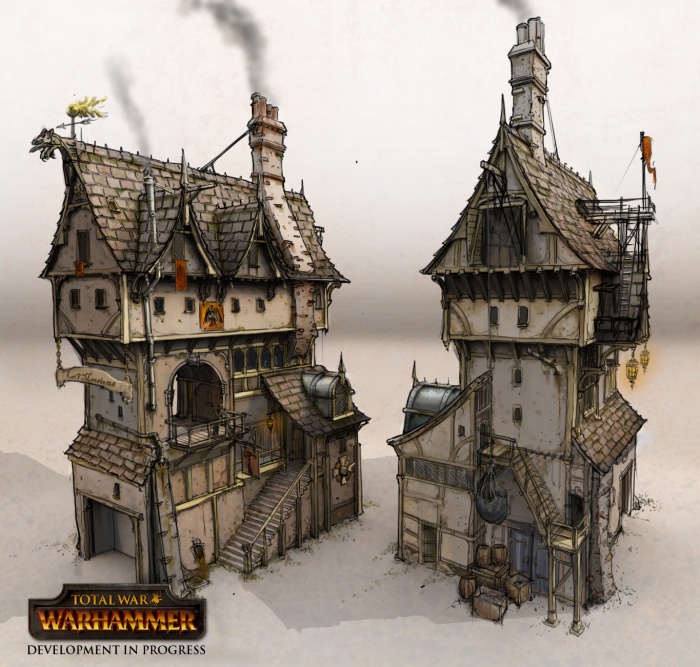 These are cities of beggars, thieves and scholars. Where priests cross paths with soldiers in the streets and ordinary folk go about their business. Occupied with everyday tasks, their thoughts are with their work and families. The lords that govern their lands and the soldiers that protect them wage brutal and costly wars to keep these cities safe, and like them, the people have adapted in order to survive, to succeed and to prosper. 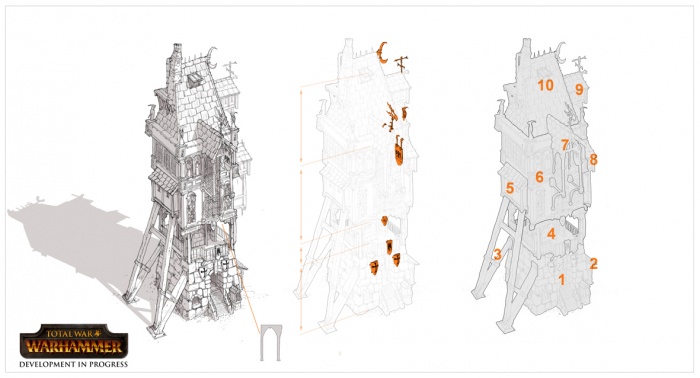